Details of the Hindu Wedding Ceremony

Hindu weddings are conducted according to the instructions cited in ancient scriptures, like Vedas and Upanishads. Hindus strictly observe all the wedding rituals while new couples enjoy a lot with their relatives and friends.

The different ceremonies of a Hindu wedding

• Pithi – Haldi ceremony is also called Pithi or Mandvo in many parts of India. It is a joyous occasion celebrated separately at the houses of the groom and the bride. A paste is made of turmeric, sandalwood, rosewater, some herbs, and aromatic oil to rub on the face, neck, hands, and feet of the bride and groom at their respective homes. People make lots of fun by throwing this paste, along with honey, juice or jam to each other.

• Sangeet & Mehndi – These are two important pre-wedding ceremonies held at the bride’s house, one or two days before the wedding. In many families, Sangeet and Mehendi are celebrated together. Beautiful geometric designs are created with the paste of dried henna leaves on the hands and feet of the bride, as well as her female relatives and friends. They sing and dance merrily and some musical instruments are also played by women on this occasion. 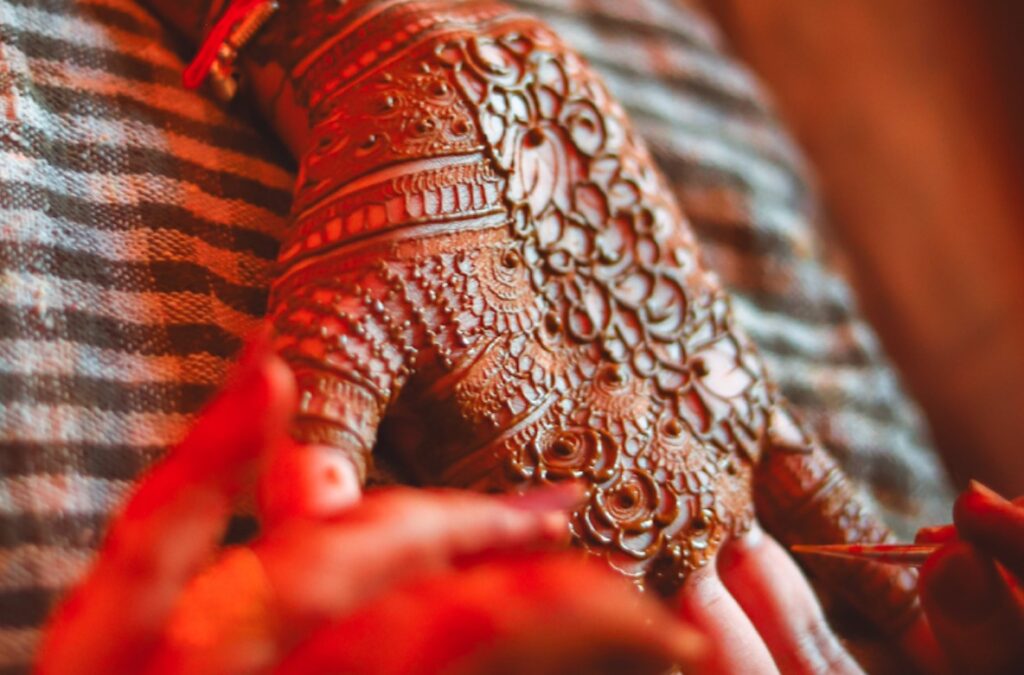 • Groom’s arrival with Baraat – The groom arrives at the wedding venue traditionally on a white mare or in a decorated car. His friends and relatives form a large and gorgeous procession called Baraat. They sing and dance to the tunes played by a musical band till they reach the wedding venue.

• Ceremony under the mandap – The wedding venue is beautifully decorated with flowers, bright-colored drapes and decorative pieces. The wedding ceremony needs to be held at the centre of the venue, under a temporarily erected Mandap.

• It stands on four wooden pillars and is often covered with a vibrant-colored canopy called Shamiyana. The sacred fire for the wedding is lit at the centre of this mandap before which the bride and groom sit for the marriage rituals.

• Ganesh Pooja – According to Hindu scriptures, every sacred ceremony should be started by worshipping Lord Ganesh. So, the priest conducts Ganesh Pooja before the bride arrives at the wedding venue, praying for the smooth occurrence of all wedding rituals without facing any obstacle. This pooja may also be held in the morning of the wedding day at the bride’s place. 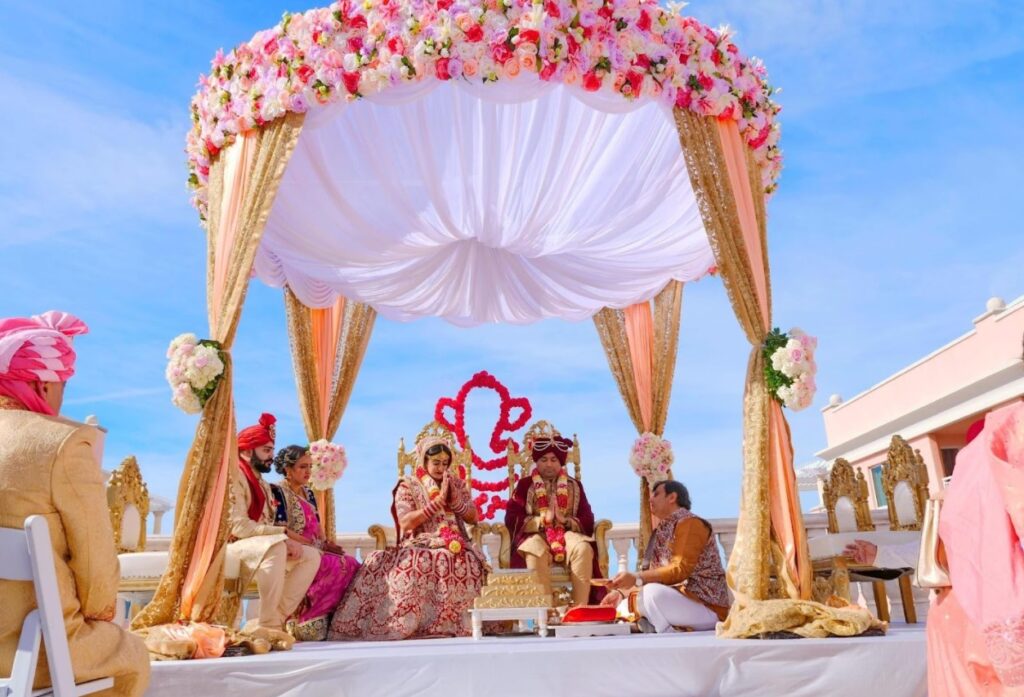 • Kanyadan – The bride’s father places the hand of his daughter to the groom’s hand, asking him to accept her in his life in all aspects. The priest reads Kamasutra hymn during this ritual and then the groom promises thrice that he will never fail his wife while pursuing moral, wealth, and love in life.

• Hasta Milap – The hands of the bride and groom are tied loosely by the priest, signifying their marital union forever. Then the scarf of the groom is tied to a corner of the bride’s sari or churni to conduct the next steps of the wedding. 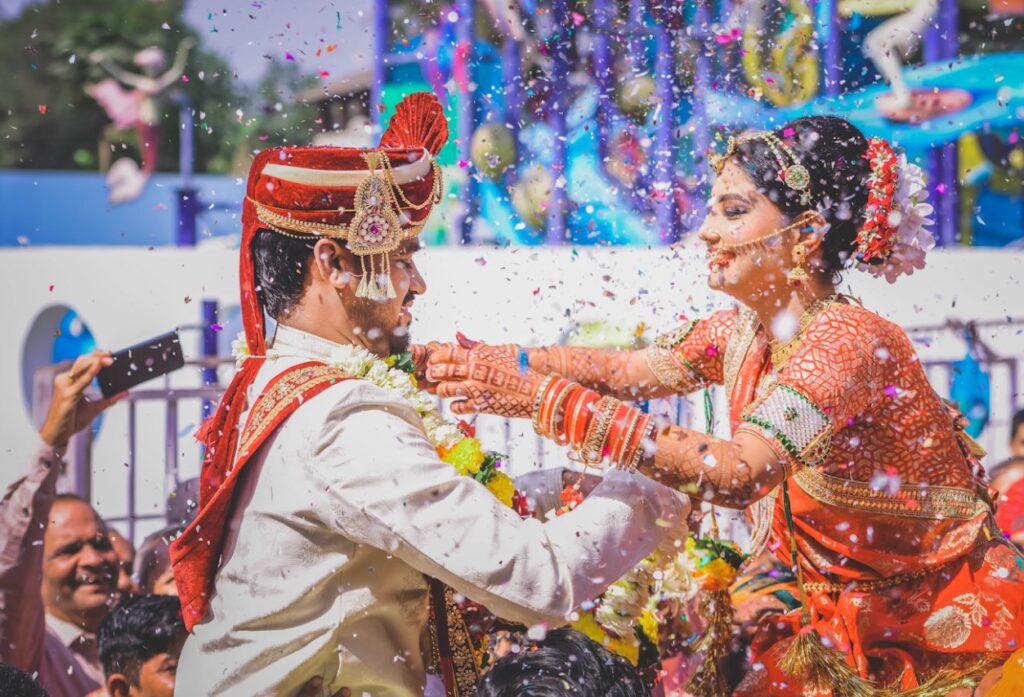 • Saptapadi – It is one of the main rituals of a Hindu wedding. The word ‘Saptapadi’ in Sanskrit means ‘seven steps’. So, it is also commonly called Saat Phere or seven rounds. The bride and groom move seven times around the holy fire lit in the mandap, holding hands or corners of their clothes tied together. They are supposed to take seven vows by uttering a Sanskrit hymn, one on completing each round, as written in ancient scriptures. In some parts of North India, the new couple takes the vows only at the end of seven rounds.

• Mangal sutra – This is a special necklace ideally made of small black beads in a series of cotton threads dyed in turmeric. However, readymade Mangalsutras are available in all jewellery shops, where golden beads alternate with black ones to increase its beauty. The groom ties the Mangalsutra around the neck of the bride, which is the last phase of a Hindu wedding and called Mangal Dharanam or wearing the auspicious thing. The Mangalsutra is a mark of a Hindu married woman and she needs to wear it all the time as long as her husband is alive.

• Ashirwad – When the wedding ceremony is over, the priest asks the new couple to stand up from their seats and seek blessings of all elders present there. The bride and groom touch the feet of their parents and other elders, seeking their blessings for a happy married life. Everyone blesses them to enjoy everlasting happiness together and this ritual is called Ashirwad in Sanskrit, meaning ‘blessing’.

• Vidai – Lastly, the bride and groom leave together for the groom’s house. This is an emotional phase, as the bride is leaving her family to live with her husband and in-laws. The bride hugs her parents, siblings, and other relatives and friends, everyone sad for bidding her goodbye. Her father leads her to the car by which she will be travelling with her husband. He requests the groom to take care of his daughter and overlook her mistakes. Then the brothers and cousins of the bride push the car while it starts for the journey to the groom’s house.

Popping the Question in 2023: Top Steps to Plan the Perfect Proposal in 2023

The Essential Pre-Wedding Beauty Treatments For A Bride