The Power of the Wedding Make-up | Business Weddings

The Power of the Wedding Make-up

Wedding make-up is magic. No, really! Aside from its ability to correct and perfect, great make-up has the power to transform, to convey an idea, theme or mood. Throughout history and across cultures, men, women and children have worn make-up for many a purpose, from an expression of individuality to a signifier of status and even as a form of protection.

Make-up is part of our daily performances, whether our stage is a stage, a catwalk or the street. What we put on our face is an important part of our costume that we slip into before we leave the sanctuary of our home and step out into the world. With a taste for the eye catching, we have perused some of the boldest trends already making waves in 2016 and set to make a commotion later on in the year.

Now, what happens on ‘Planet Catwalk’ does not always translate well in the real world. Recreating something that looked utterly ‘fabulous’ on the runaway and making it work for us mere mortals can be a mine field, but in the words of the great baird, ‘All the world’s a stage: and all the men and women merely players’, it’s time for us to play on and indulge in the bold excess of dramatic make-up!

The ancient Egyptians thought of blue as a celestial hue, associating it with the sky and divinities, and used it to protect wearers against evil spirits in the afterlife. There is something about the colour blue that, once applied to the skin gives it an otherworldly, ethereal property.

Peeps of blue were all over the Spring/Summer 2016 catwalks. Both Roksandr in London and Sonia Rykiel in Paris chose to adorn models with powdery blue smokey eyes in shades of cornflower and sky blue, whilst French designer, Alexis Mabille, opted for something more sea nymphy, with a wash of blue-green eye make-up.

Chanel’s SS16 catwalk gave us more of a futuristic take on the trend, with a mask-like sweep of blue across both eyes. 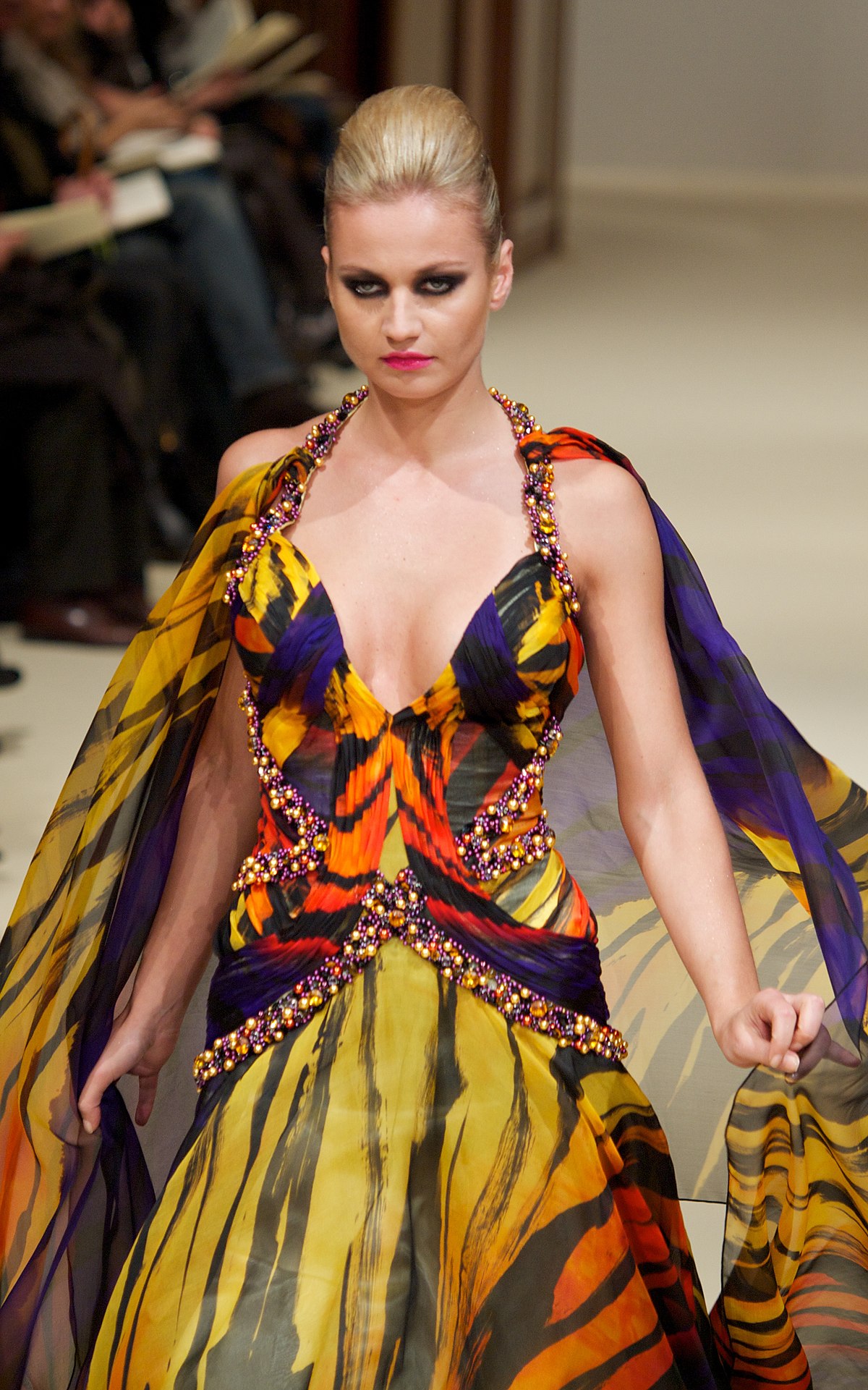 Sumptuous and regal, I am a firm believer that where gold make up is concerned, the bolder the better, and if this year’s catwalks are anything to go by, I’m not the only one.

Gold leaf eyes defined with thick black feline flicks featured in the Creatures of the Wind SS16 collection. The gold lips that were sent out at Prada were utterly unconventional thanks to make-up supremo, Pat McGrath. Whilst the show was the prefect springboard for launching her first ever make-up product, Gold 001. A gold so unashamedly unrelenting that, when it went on sale days after its fashion week premiere, unsurprisingly the limited stock promptly sold out, leaving many a magpie disappointed.

Ashish’s SS16 collection proved that not all that glitters is gold. Instead, he sent his models down the runway with a smattering of oversized sequins, generously dusted on to their hair and face. Most recently, Burberry‘s Autumn/Winter 2016 range confirmed that we’re not done with the glitter trend yet. Their models sported plenty of glitter fall-out underneath their eyes and around the tops of their cheeks. 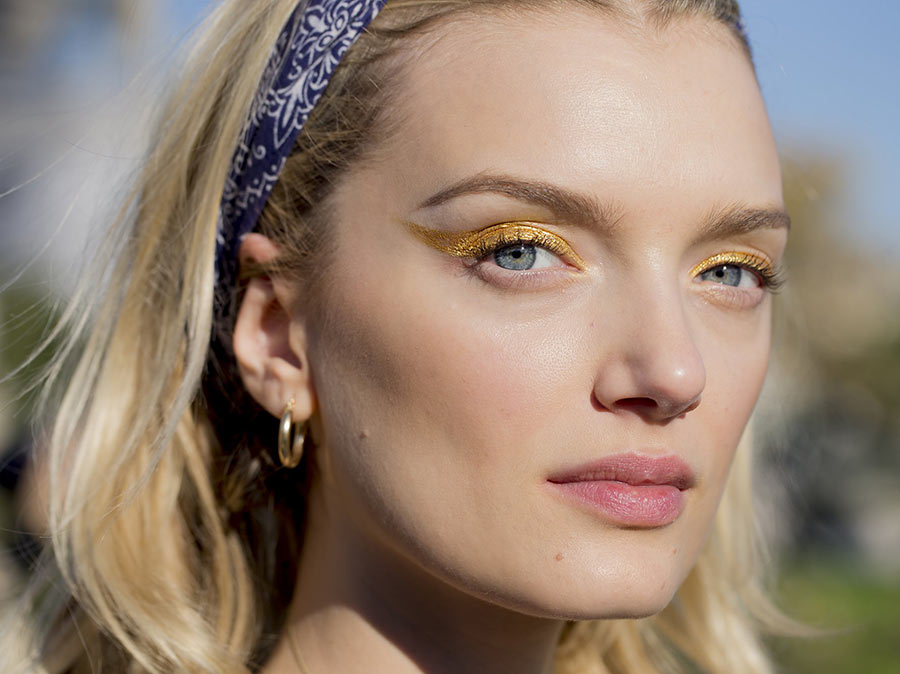 Look at me lips

Statement lips have never been out of fashion! As far back as Ancient Mesopotamia, women have looked to crushing insects and precious stones to concoct their desired lip stain. Thankfully, although we don’t have to go to such extremes nowadays, the appeal of a strong lip is no less enticing and many of us are prepared to spend a pretty penny in search of the perfect lipstick.

Red lips are iconic on their own and as part of an ensemble have the uncanny ability to single-handedly elevate a look. The SS16 collections from designers as varied as Oscar de la Renta, Proenza Schuler, Victoria Beckham, Topshop Unique and Marchesa, to name just a few, go to underline our enduring attraction to the red lip.

Looking ahead to AW16, the red lip seems as if it will mature like ripening fruit, to juicy shades of Merlot as presented at Erdem, dark cherry exhibited by Louis Vuitton and deep blackcurrant tones popular at Dior, Marni and Rodarte.

All about the eye

Graphic eye make-up made itself well and truly known on both the Spring/Summer and Autumn/Winter 2106 catwalks. For spring, Italian fashion house, Missoni, opted for boldly coloured eyes sans black liner. Cobalt blue, sunshine yellow and turquoise were smudged on to models’ lids and extended into their brows.

The ‘in your face’ eyes at Kenzo’s AW16 show covered two trends in one. Graphic, check! Glitter, double check!! The extended cat eyes on display were certainly a thing to behold.

At Karl Lagerfeld’s Fendi, we were treated to several variations of the cat eye, all black lined and accented in a spectrum of bright colours. The stand out look came in the form of an Egyptian-esque eye that would have rivalled Cleopatra’s.

Every season there’s one or two beauty looks that etch themselves on your memory for their unusualness or boundary pushing.

For SS16 one of the contenders for this award was surely Riccardo Tisci’s Givenchy. He took just a handful of models and made each one up very differently. He then contrasted them with a sea of barefaced models to create this show-stealing impression. Thanks again to the work of Pat McGrath, who on this occasion collaborated with Tisci, a quintet of models took to the runway wearing what can only be described as ‘The Face Mask’. Naturally these weren’t any old face coverings. Full-faced and heavily embellished with whisper thin tulle scales and luminescent ivory pearls, another showcased pale blush palettes encrusted with beads and sequins. Whilst another was adorned with gold and crystal jewellery, each drawing on elements of the corresponding model’s dress. 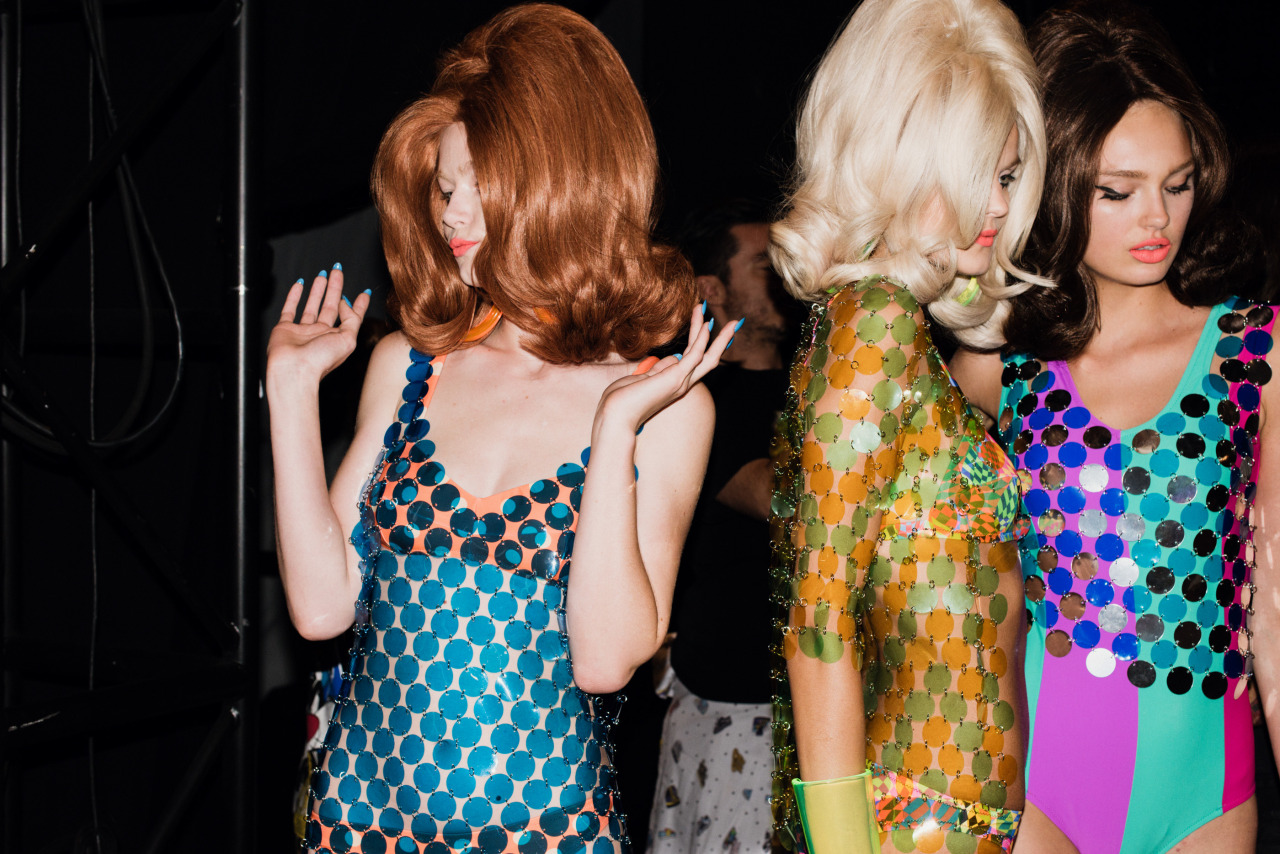 In its entirety this was most certainly a look that could only work on the catwalk, right? Perhaps, but one thing’s for sure, when the fashion gods decree something to be so, it oft is, before being adapted into something more palatable and wearable for everyday use and performance.