Alstroemeria (also known as Inca Lily and Peruvian Lily) is extremely suited as a (perennial) garden and patio plant. The characteristic of these plants is that they provide copious blossoms and are rich in color. In general, the period in which the flower is extensive. The plants can last through the winter and the flower stems are sturdy. Also, the stems reach sufficient length, allowing them to be picked for cut flower arrangements in the home. 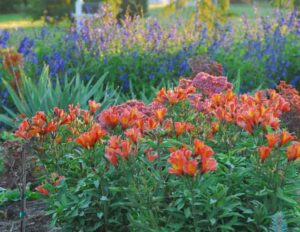 The alstroemeria is originally from South America. Most of the botanical varieties originate in Chili. However, various different varieties have been found in other countries in South America. Remarkable is the great difference in the climates of those countries, where the botanical varieties originate. There have been varieties found high in the Andes Mountains, in the deserts along the Pacific coastline, and even deep in the tropical forests of Brazil. This enormous genetic diversity makes it possible by way of in vitro propagation to cultivate many different types of alstroemeria on an even broader scale of color. In fact, it is now possible to propagate every color alstroemeria.

The Growth Pattern
The part of the alstroemeria plant underground consists of a rhizome. This rhizome produces roots, blind stems (i.e. stems without flowers), and most importantly – the flowering stems.

The Leaves
The leaves are thin, moist, elongated, and have a set of parallel veins. The type of leaf can sharply vary per variety. A typical characteristic of the alstroemeria and some other close plant sorts is that the leaves turn at an angle of 180o on the stem, thus the morphological belly of the leaf is faced upward.

Alstroemeria has a wide range of flower sizes and shapes. Every variety is truly zygomorphous. This means that alstroemeria is divisible into similar halves by only one plane of symmetry. The flower itself is threefold:

Use as a garden plant 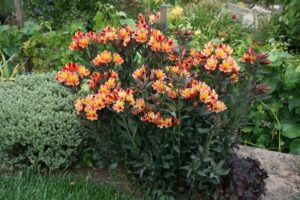 Choice of location for planting
You can plant your Inca in the half shade but also in the full sun. In both cases, the plants will thrive well. Alstroemeria is a strong plant that adapts itself to almost any type of soil. However, if planted in heavy clay soil or very sandy soil, it is recommended to first prepare the bedding of the Inca by enriching it with hummus. Planting in a damp place in the garden is not a problem for the Inca. Even in a dry location, the Inca will thrive as long as you provide it with sufficient water during the first three weeks of bedding.

Planting
When there is no longer a risk of night frost, you can plant the Inca directly in the ground. They do not have to be planted deeply. Keep the top part of the root clump level with the ground (or just a bit deeper).
Plant the Inca between 40-50 cm apart in order to ensure that a nice patch can form and spread out. You can, of course, plant the Inca separately in the garden.

Nourishment
If the plants are placed directly in the ground, there is no need to provide added nourishment. However, in poor soils (such as sandy ones) it is advised to provide the plant with fertilizer. There are fertilizers in granule form that can be purchased and which over a time-release effect in nourishing the plant. Ask your garden center about this product.

Winter hardy
Alstroemeria plants are limited in their winter hardiness. This differs depending on the variety, soil type, and location in which it is planted.
In general, they can withstand a week of temperatures of -10°C (14oF). This is based on the USA-standard time zone to at lease time zone 7. It is recommended by severe freezing temperatures to cover the plants, for example with straw. In this way, the plants will rejuvenate, more quickly in the spring.

Use as terrace and patio plant 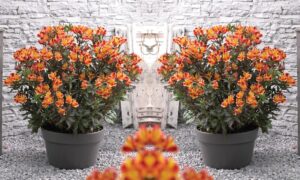 Choice of location for planting
The Inca renders copious flowers and provides a large green expanse.
For these reasons, the Inca needs a lot of water and nourishing in order for it to grow well. It is good to keep this in mind when you decide on the Inca for a terrace or patio plant. It is advisable to place the Inca in half shade. If placed in direct sunlight, the plant-soil runs the risk of drying out quickly; and, this can slow the growth of the Inca.

Planting
An Inca plant can easily fill a large pot. One plant is sufficient for a pot with a diameter of 30-40 cm. When using larger pots, we advise a number of plants are potted. The plants do not have to be potted deep, Keep the top of the root clump even with the top of the soil – a bit deeper if need be.

Nourishment
In order to encourage good growth and to deal with the yellowing of plant leaves, it is advisable to administer extra fertilizer to terrace and patio plants. You can add a liquid fertilizer in the watering of your plants. Another possibility is special fertilizer granules, which allow for a time-release effect. In this way, the nourishment is slowly administered to the plant. The liquid variant via the watering can or sprinkler is more time consuming because, for good results, you need to repeat the treatment every two weeks. Also, problems arise if there are periods of heavy rains, because, the plants will not need water but they still need fertilizer. For this reason, we advise the use of fertilizer granules. Mix the granules in the potting soil or spread them on top of the soil. The effects of the granules last the entire growing season, which means that you only have to administer once a year. Ask your garden center about this product.

Use as terrace/patio plant – not winter hardy
Although the Inca is winter hardy in the open ground, it will have to be treated as a potted-plant if kept on a terrace or patio. Take the plant indoors at the first frost. Place it in a cool and lighted area. Keep the plant frost-free at a temperature between 0°C and 8°C (32°F and 46°F). Under these conditions, the plant will become dormant and its growth temporarily halts. The Inca does not need to be watered during this period. If the plant is placed in a dark area, the stems will become long, slack, and yellowish. This will not have a lasting negative effect on the plants. As soon as the Inca is placed back on the terrace in the spring, it will once again begin to produce new, sturdy, green shoots. The old stems can be removed once the plant is visibly active in the formation of new shoots.

Interested in flowers? Take a look on our Wedding Flower Glossary

12 Stunning Wedding Flowers And Their Symbolism

How To Choose My Wedding Flowers in 2023

Flowers and months. From January to December